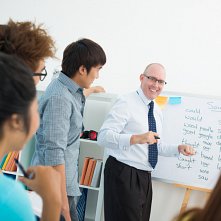 Company growth in recent years had resulted in a more ‘silo’ style approach to business for a large South of England based pharmaceuticals company. The CEO and senior management team were keen to create an atmosphere of shared ideas and responsibility, with close, cross-team working throughout the company.

The aim of the training was to open up pathways between teams and departments, by delivering team building and networking skills. With this in mind, CTP was engaged to deliver a day’s training for 80 staff at their Medical Affairs Team Meeting to be held in Italy, with a view to getting all members of staff interacting with each other and networking within their different teams.

In addition, CTP delivered a personal development element within the training, whereby staff could request coaching to help them address issues of importance to their work, or that of the team or company more generally.

An attention-grabbing opening presentation on ultimate team-working, looking at CTP’s work in the high pressure environment of high threat bomb disposal and search operations, set the scene for the event. Immediately harnessing interest, the presentation was extremely well received and fed into the scenarios and simulations that formed the basis for the training day. The team then worked in smaller groups, moving between various skills-development stands receiving briefings, coaching and enjoying appropriate interactive group exercises aimed at building on the One Team concept.

The senior management team was looking for staff to interact face-to-face to build a One Team ethos. In the two weeks following the training event, CTP could illustrate to senior management that over 80 networking coffee or lunch meetings had already taken place between staff, based on individuals linking up with others from the wider team, with whom they had previously only had a brief or tenuous contact.

Excellent individual feedback from the training also indicated that invisible barriers between team members had been broken down and replaced by positive relationships between staff at all levels.