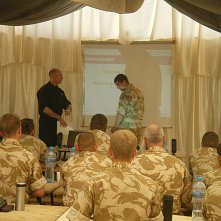 The safety and effectiveness of teams working in high threat bomb disposal and search for the British Army and coalition forces during operational tours of duty, is of paramount importance to commanders – and everyone involved.

To introduce a non-technical skills-set for operatives using training based on human factors lessons identified from other safety-critical industries and Critical Team Performance’s (CTP) own extensive experiences of operating in front-line operations around the world.

In a role that is globally unique, CTP deploys twice-annually to an 800-man desert training camp. Once there, trained facilitators carry out theory and field-based skills development, working directly with the high threat bomb disposal and search teams and associated supporting elements. CTP is deployed on an ongoing basis in the field and has worked successfully in this role since 2010.

Over 1,000 soldiers, from Sapper to Major, have now passed through the CTP desert based training intervention with 99.9% saying that the training was a valuable source of new information and provided them with new ways of thinking.

‘CTP delivered human factors (HF) training to a large cohort of Explosive Ordnance Disposal (EOD) and Search officers and SNCOs, the majority of whom are destined for operations in the near future.· A thoroughly professional approach combined with a relaxed, innovative and witty demeanour enabled CTP to win over even the most sceptical; the value of their training in the safety critical sphere of EOD & Search soon became apparent to all ranks.· There is no doubt that CTP’s experience, knowledge and unbridled enthusiasm is inspirational and contributed to the success of the classroom course.· Equally important though was their HF input into scenario-based exercises in the field and their analysis for use in after action reviews.· In summary, it was extremely valuable training delivered in a highly effective manner.’